(This article originally appeared in the Times of Israel, February 21, 2017) 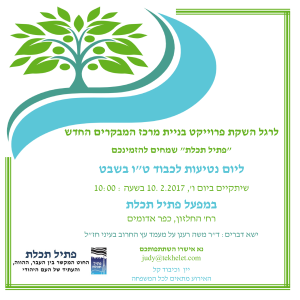 Tu Bishvat may be in the middle of the winter, but it has come to symbolize the portent of spring and new beginnings. In that vein, the Ptil Tekhelet organization, which produces the Biblical blue dyed strings for the tzitzit fringes, chose the date to launch its new, and most ambitious project, the building of a new Visitor Center, adjacent to their current factory in Kfar Adumim. This past Friday, on the eve of Tu Bishvat, a group of friends and supporters gathered to inaugurate the project. The featured speaker was Dr. Moshe Raanan, a biology lecturer at Herzog College and Michlalah college for Women and an expert in flora and fauna of the Land of Israel. In the spirit of Tu Bishvat he gave a fascinating lecture delving in to the significance of the carob tree in Rabbinic literature. The group then proceeded outside to plant various trees, including, of course, a carob. 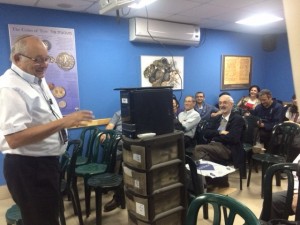 While many of the participants were long time followers of the Tekhelet revival, there were some uninitiated visitors as well. In their honor, Dr. Baruch Sterman, one of the founders, provided a tour of the factory as well as a fascinating dyeing demonstration. Dr. Ari Greenspan, chairman of the foundation, gave a short and impassioned inaugural speech. He put in perspective just how revolutionary the foundation’s work has been. 25 years ago, if you had stopped a Jew in the street and asked him what Tekhelet was, he probably would not have known. Today, whether that individual actually wears the Tekhelet strings or not, he will most likely be able to tell you that the dye comes from a snail, and that many people today wear blue fringes on their tallit. The modest factory, the only one of its kind, produces several thousand sets of Tekhelet strings a month, which are worn throughout the world. The organization is dedicated to educational programs as well. In addition to hosting lectures and publishing literature on all topics related to Tekhelet, they have a new website full of information, they provide interactive tours of the factory, at- home dye kits, as well as a family friendly snorkeling tour on the beach of Chof Dor. The demand for these multidisciplinary educational experiences, which combine halacha, archaeology, bible, history, chemistry, linguistics, numismatics, and biology has increased to such an extent, that the organization has decided it is time to build a world class educational center. 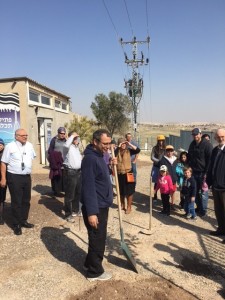 The morning was organized by Joel Guberman, co-founder and on-site manager of the factory. As is typical of the many events he has put together during the 25 years of operation, from start to finish it was thoughtfully executed, the wine and cheese tastefully complementing the Tu Bishvat fruits.
The event concluded with an unplanned spectacle. As guests were busy digging and watering, board member, Zvi Sand suddenly remembered that he had a drone in his car. He ran to get it and excitedly launched it above the factory, offering to provide aerial footage of the site and the newly planted trees. The hope is that this new Visitor Center, too, will take root and soar to the sky.

Rabbi Dr. Zivotofsky is on the faculty of the Brain Science Program at Bar-Ilan University in Israel