The Biblical Commandment and Tying Tzitzit

And G-d spoke to Moshe, saying, Speak to the children of Israel, and bid them that they make them fringes on the corners of 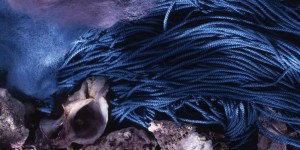 their garments throughout their generations, and that they put upon the fringe of each corner a thread of blue. (Bemidbar 15: 37-38).

And G-d spoke to Moshe, saying, Speak to the children of Israel, and bid them that they make them fringes on the corners of their garments throughout their generations, and that they put upon the fringe of each corner a thread of blue. (Bemidbar 15: 37-38)

How many strings on each corner?

(The Vilna Gaon claims that the correct version is that of the Sifre Shelach: “With three strings of white and a fourth of tekhelet.” used in Tying Tzitzit)

There are three different opinions of the Rishonim regarding the ratio of white to blue strings: 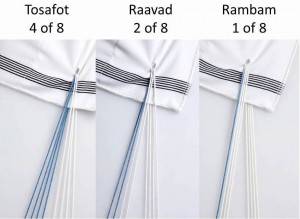 When tying tsitsit with tekhelet, the gemara speaks of chulyot.There is an argument as to what the numbers seven and thirteen refer. Most Rishonim explai 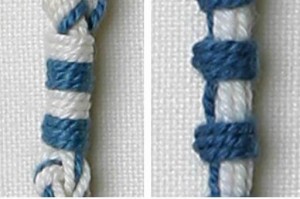 n that these are the number of chulyot (each of which is made up of three twists as Rebbe states). Some Rishonim explain that each chulya can have seven or thirteen windings. As for Rebbe’s three windings, this is explained either as the minimum number of tekhelet windings in each chulya (and the number seven includes both the white and the tekhelet), or that Rebbe is talking about the absolute minimum required to fulfill the mitzva with only one chulyah (bedieved deorayta), but the best method (lechatchila derabanan) should have between seven and thirteen windings.

There is an argument as to the color of the windings when Tying Tzitzit:

Rashi brings down two possibilities regarding the placement of the upper most knot.

There is an argument as to the nature of the knots of the tsitsit. The Geonim hold that a knot can be one string tucked under itself. Rabbenu Tam compares the knots of tsitsit to knots in other laws like Shabbat and therefore requires a double knot.

The length of the windings and the strings 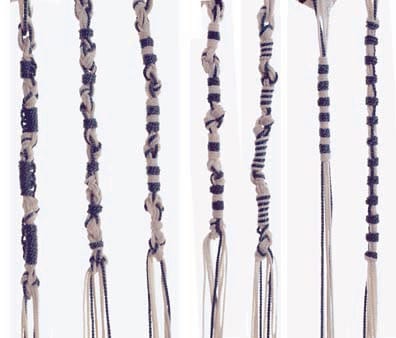 The principles discussed above are applied differently by the poskim. The various opinions described below correspond to the above photograph (left to right).

2. One understanding of the Rambam – all twists blue except the first and last, with a double knot between each chulya.

5. The Raavad quoting Rav Natronai Gaon – five knots. Between each knot, seven or thirteen twists, with the twists alternating white then tekhelet. Between the second and third knot, the amount of twists is not definite.

6. Rav Amram Gaon – seven or thirteen chulyot alternating white then tekhelet. A knot at the beginning and at the end. (These knots are not double, but rather the winding string tucked under itself.) The Baal Haitur’s shitta is virtually identical but he has a knot after each chulya.

7. The Rambam – all twists are tekhelet except the first and last. Seven or thirteen chulyot are tied with a knots keeping them together and separate from each other. The Yemenites have a tradition (even with white tsitsit) of tying a special knot that is the chulya.  See below.

Ready to fulfil the mitzvah of tekhelet?

Click here to go to our streamlined ordering process here:

Tying in the Yemenite Tradition

Tying in the Radzyner Tradition

For more details on tying click here to see our Tying Tools Section.