A recent news story reported on a fascinating archaeological find on Har Tzion in Jerusalem:

Luxuries, like a bathtub, signal that the 2000-year old house being dug up in Mt. Zion, near Caiaphas’ home, belonged to a member of the ruling class.

Archaeologists excavating in the heart of ancient Jerusalem have begun to uncover the neighborhood that housed the elite 2,000 years ago – most probably the priestly ruling class.

Inside the houses, the archaeologists made an astounding discovery:

One highly unusual discovery is murex shells, 13 of them – the largest number ever found in the ruins of first-century Jerusalem.

Murex, a genus of Mediterranean sea snail, were highly valued in Roman times because of the rich purple and turquoise dye that could be extracted from the living creature. Since it is highly unlikely that live snails were brought from the coast to be “milked” in Jerusalem, Gibson postulates that the dye came from the coast in vials that were marked by shells.

This is not the first time that Murex shells have been found in Jerusalem excavations. The important questions are: How did these sea-snails make their way up to the mountains of Jerusalem, and for what purpose? In The Rarest Blue, Baruch and Judy Sterman recount their meeting with archaeologist Shimon Gibson and discuss these issues. Here is an excerpt from the book describing that meeting, and suggestions for answers to those burning questions: 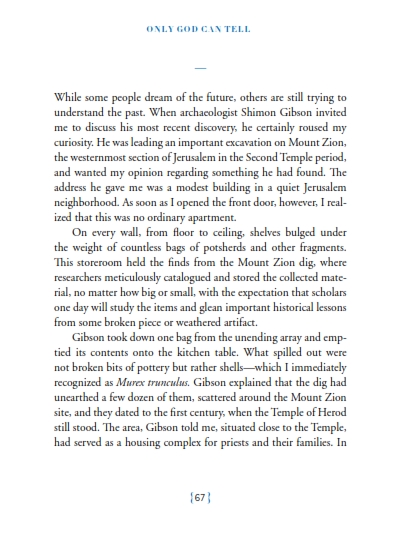 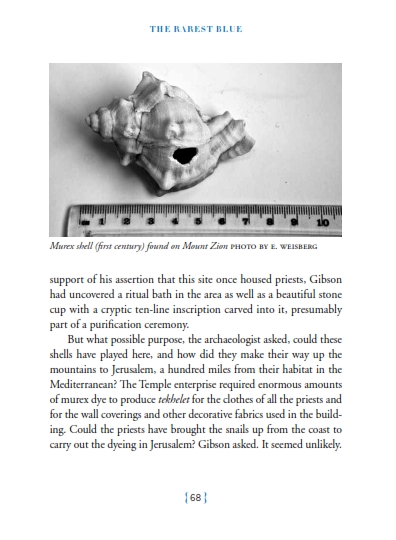 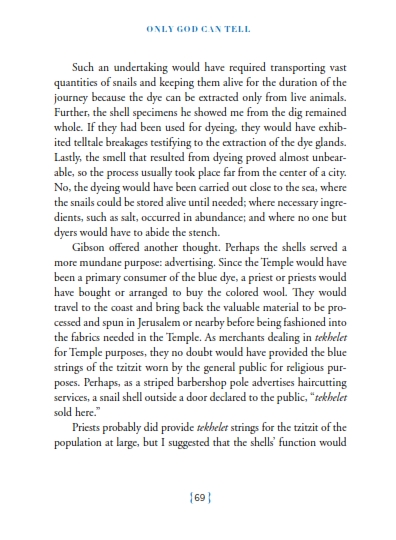