Tekhelet, or Biblical Blue, was once the most precious commodity in the ancient world. For reasons, some understood and some less so, about 1300 years ago, Tekhelet was lost, and the secrets of this wondrous blue color including he identity of the mysterious sea creature – the Chillazon – that produced the dye, slipped into obscurity. Jews continued to wear tzitzit, but with only white strings were unable to fulfil the mitzvah in its most complete form. Over the past few decades, research by both the scientific and halachic communities has led to the identification of the Chillazon as the Murex trunculus sea-snail and once again Jews can wear Tekhelet as commanded in the Torah.

The loss of Tekhelet in practice rendered many of the laws associated with it arcane, and study of issues relating to the topic inaccessible. Once every seven years, daf yomi learners reach the 4th chapter of Menachot, which includes the largest Talmudic concentration of laws pertaining to Tzitzit and Tekhelet. Ptil Tekhelet has collected various articles, shiurim and other resources to aid those interested in understanding the Talmud’s discussion.

To find out more about Tekhelet in general or in depth, we invite you to browse our website, search our online library, and listen to or watch lectures and shiurim from top Rabbis and scholars. Below is a collection of resources to help with Perek Hatekhelet. 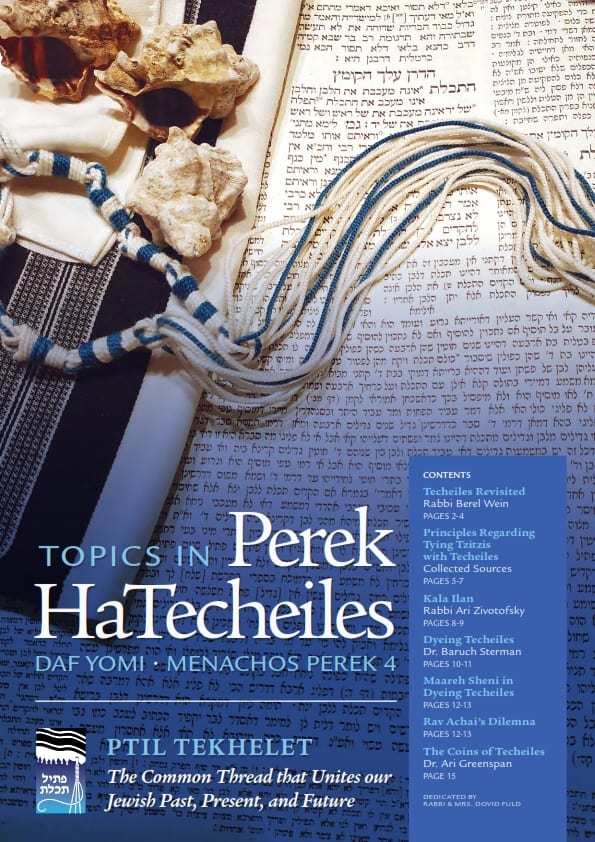